YETI Boomer Dog Bowl Review: Is It Worth The Money?

When I joined my family they gave me a dog bowl that came in a silicon stand.. you know, the ones that are advertised as non-skid, non-tip. Well, I may have been small, but I have always been mighty. After repeatedly flipping my bowl, getting water all over my crate, and then pulling the silicon stand into pieces, my parents had to get me a new water bowl. Ha, see, I know how to get what I want. I really wanted a YETI Boomer dog bowl.

So my parents invested in the dog water bowl of a lifetime (hopefully). We say hopefully because it was quite expensive for a dog bowl, and so you may be reading this wondering if you should spend all that money on a YETI dog bowl. This post covers my review of the YETI Boomer Dog bowl, the pros and cons, and whether, in my parents’ opinion, buying a YETI dog bowl is worth the money, to help you decided whether it’s worth it, too.

One of the key features of my YETI dog bowl is its durability. YETI Boomer dog bowls are made from non-insulated stainless steel, with a double-wall construction, which gives them a solid, high-quality feel. This is the same for the large and small YETI dog bowls (Boomer 8 and Boomer 4 bowls).

My YETI bowl is therefore very sturdy and not appealing to bite, because of the thickness, hard and smooth materials, it just doesn’t interest me as something to grab or chew. I did try to chew this bowl initially, but my attempts didn’t even leave scratch marks on the metal, so I found something else to chew on instead.

Although it seems obvious, it’s really important to have regular access to fresh water, and my parents couldn’t trust that I would actually have any water if I flipped my old bowl repeatedly, almost as soon as I was given a fresh drink. They were also concerned that I could also have swallowed some pieces of silicon from the ‘foot’ that the bowl stood in, to (apparently) stop me flipping it over.

My parents also tried one of those ‘Snap-y-Fit’ dog crate bowls that you attach to the inside of a wire crate, which therefore can’t be flipped. But I decided to try and chew on the bowl constantly, and that was noisy and also probably not great for my teeth. So finding a bowl I can’t try to eat or flip was really important!

Can you flip over the YETI Boomer dog bowl?

Well, speaking from personal experience, no. I haven’t been able to get under my YETI bowl to flip it. For starters, my YETI dog bowl is pretty heavy, it weighs 1.9lb when empty. It doesn’t appeal to me to pick it up by the edge because of the thick, smooth walls mentioned above. Someone who was much more determined and boisterous than me could probably manage it, though.

The YETI Boomer dog bowl also has a non-slip foot, which means it’s hard for me to push it around, and the shape of the bowl’s design makes it difficult to get a paw or nose under the edge to actually flip it over. 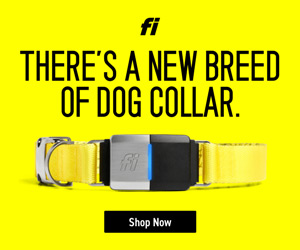 I can still put toys or my paws in the YETI bowl and then shake them around when soaking wet with water, though, but I’m sure I could do that with just about any dog water bowl.

Is the YETI Boomer bowl the best-looking dog bowl on the market?

Well, my parents seem to think so. The YETI Boomer dog bowl matches their YETI Ramblers so we can all feel like part of the same pack when having a drink together 🙂

The YETI dog bowl is available in a range of attractive colors, as well as plain stainless steel. My bowl is the ‘seafoam’ color. The other color I really like is the ‘river green’ version, which is a darker green.

How big is the YETI Boomer dog bowl?

The YETI Boomer 8 bowl holds eight cups of water and measures 8 inches diameter by 3.5 inches tall. It’s been a perfect size for me, I first used my bowl when I was around three months old, and it’s good to know I won’t outgrow it when I’m fully grown (when I’ll be a large Border Collie and around 45lb).

My feline brothers and smaller dog buds will be pleased to know that YETI also makes the Boomer dog (or cat) bowl in a smaller size, called the YETI Boomer 4 dog bowl. I am also pleased about this and hope my brothers get their own water bowl, as they seem to like drinking out of mine (“PAWS OFF, KITTY!”).

Is the YETI Boomer dog bowl easy to clean?

Yep. It is dishwasher-safe, which is great – although because my bowl is used as my water bowl and doesn’t get dirty enough to need to go in the dishwasher, my parents just give it a handwash when they fill it up in the morning.

YETI states that the color is built to last, and should not peel or crack – my bowl still looks like new after a few months – time will tell if this bowl lasts me a lifetime, but early indications are good that it will last a long time.

Why do dogs like to drink out of the YETI Boomer bowl?

Why we love drinking out of this bowl is a mystery. I’m not the only one, others reviewing the bowl on YETI’s website (and on REI) agree with me. My theory (based on personal experience) is that:

The bowl is BPA free and my parents tell me that is a very good thing for any product that you either eat or drink out of.

Is the YETI Boomer a good outside dog bowl?

Yes, YETI designed the Boomer dog bowl to be puncture and rust-resistant, which means it would be suitable for outside use. I use mine inside, but that’s because I eat and drink indoors. If we go on adventures then my parents bring a smaller, lightweight bowl instead.

Is the YETI Boomer dog bowl worth the money?

At an RRP of $49.99 (and $39.99 for the smaller Boomer 4 bowl) this is definitely an investment. Based on my parents’ experience of buying a cheaper alternative, which needed replacing after a week, it seems like with most things that buying a ‘bargain’ product is often a false economy and you get what you pay for. So often in such cases, we end up with the more premium product eventually anyway, when a lesser-quality alternative fails and we can have confidence that the premium option will last a long time and be practical and enjoyable to use.

I use the YETI Boomer dog bowl multiple times a day, every day. I enjoy using it, it’s standing up to my puppy behavior, and my parents like it because it looks stylish, doesn’t make a mess, and it’s easy to clean.

So in summary, we like it, we like it a lot. For an essential dog product such as a water bowl, I don’t think you can go wrong. 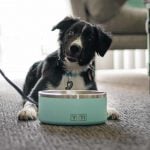 YETI Boomer Dog Bowl Review: Is It Worth The Money?
Design & Function
9.5
Durability
10
Performance
9
PROS
Durable, suitable for outdoor and indoor use
Attractive design
Dishwasher-safe and BPA-free
CONS
Too heavy to take traveling
Price may put some off
9.5
Overall Score
See it at YETI.com

Available for purchase at the stores below:

The Best Hiking Boots For Men and Women in 2021

This guide makes it easy to find the best hiking boots for you - both men's and women's, from breathable lightweight boots to waterproof backpacking options.

This Chirp Wheel review explains 1) How well it relieves back pain. 2) How it works. 3) How to use it properly. 4) My final verdict on this back roller wheel.

What to Bring on a Camping Trip: PLUS Full Checklist

Complete camping checklist, plus tips on what to bring on a camping trip, including stuff you need, and luxury camping gear you may want to take car camping.

Including a complete guide to choosing the best backpacking tent for multi-day hiking trips, lightweight and ultralight tents as well as budget options.

From comfortable two-person camping hammocks to portable ultra-lightweight hammock tents for backpacking, plus advice for finding the best hammock for you. 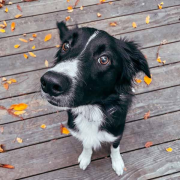 Keplerhttps://www.trailandkale.com/adventure-dogs/
Hi, I'm Kepler, the official adventure dog of Trail & Kale! I'm a frisky pup with a love of life, frisbees, and dirt. I write about dog gear and the essence of being an adventure dog 🙂

Best Dog Backpacks For Hiking With Your Dog

CBD For Dogs: Everything You Wanted To Know About...

Trail Running With Your Dog: Tips, Safety, Handling the...

The Best Harnesses and Leashes For Running With Your...

How To Calm Your Dog Down After Exercise

YETI Boomer Dog Bowl Review: Is It Worth The...

Gunner Kennels review: What we thought of the safest...