5 best running hats/technical caps that: wick sweat away from your face/eyes, keep your head/face/neck protected from the sun, look awesome!
Read more

Find the best running hydration pack for trail running chosen by our experts. Also learn when to use a running vest, how to choose, sizing, and cheapest prices.
Read more

Visit our On Running Shoes Buyer’s Guide to find the best On shoes ranked & reviewed.

The On Cloudrush is a shoe that has been designed with one major goal in mind, to help well-trained runners run faster. This On Cloudrush review will help uncover the great features of these running shoes, that are built for those who love to run fast and need a shoe to keep up with them.

If you are familiar with the On Cloudracer then you may draw some similarities to this shoe, and with good reason. This is the new and improved successor of that shoe!

I’ve taken the Cloudrush out for some speed sessions already and would like to share my thoughts so far. As always, I will update this post as I put more miles in these shoes and if I gain more insights into their performance.

This is a pretty sleek and sexy looking shoe, I don’t think many people will look at it and think bad thoughts. I really like the no-nonsense black and white “colour” scheme, that says “I’m ready for business” too. As with other On-Running shoes that I have tested, there appears to be very little waste on these and they look to be of a high-quality build. 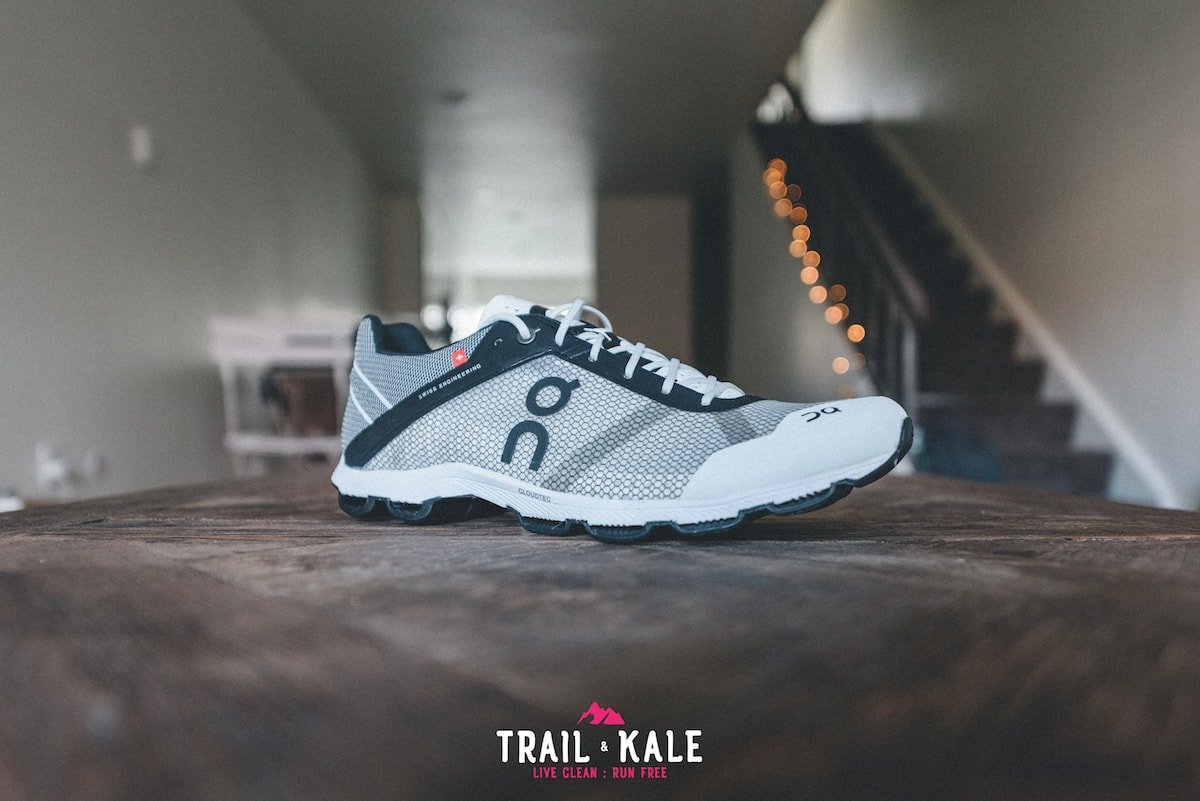 I know a lot of people describe well-fitting shoes as, well “fitting like a slipper”, and that may seem like a lazy way for me to tell you how these feel but… they do fit like a slipper. On-Running have done this intentionally for those who like to run without socks, I suppose this may appeal more to triathletes who don’t want to waste precious seconds putting socks on in transition zones.

There is a nice amount of reflective decals on the back of the On Cloudrush, important if you’re going to be running at night. No reflective strips on the front though, I suppose you should be relying on your running headtorch for being visible from the front!

When you pick up the box that these shoes arrive in you may think that On-Running has forgotten to put the second shoe in there. That’s understandable as these shoes are very light, weighing in at 220g. That’s one of the lightest shoes that we have reviewed on Trail & Kale to date. The On Cloudflow managed to match this though, and they include a little more cushioning, which is I suppose even more impressive.

On-Running have opted for a classic lacing system to reduce overall weight but their laces did feel a bit too long for my liking. Maybe I have slim feet but I can’t see anyone ever needing that much lace. I find myself making double knots, just to stop them flapping.

So nothing groundbreaking in the lacing from On-running. I feel that after trying Merrell’s Agility Peak Flex 2 trail shoes and experiencing their rather nice Omni-Fit lacing system, I’m becoming a bit of a lace system snob. Is that a thing? It is now.

Nothing special to report here, the toe box is of medium width and fit my shaped feet very well with just enough wiggle room for toe splay.

The On Cloudrush has a 5mm drop from heel to toe… I’m a fan of minimal shoes with a little drop when I’m running fast. The closer to a natural footfall that I can get, the more efficient my running form becomes. Natural instincts and form take over when I have less between my bare feet and the ground.

As you may expect from a shoe this minimal, there isn’t much padding around the heel and ankle areas. I didn’t find this to be problematic as the shoes fit so well that there wasn’t any movement between foot and shoe to have any rubbing. 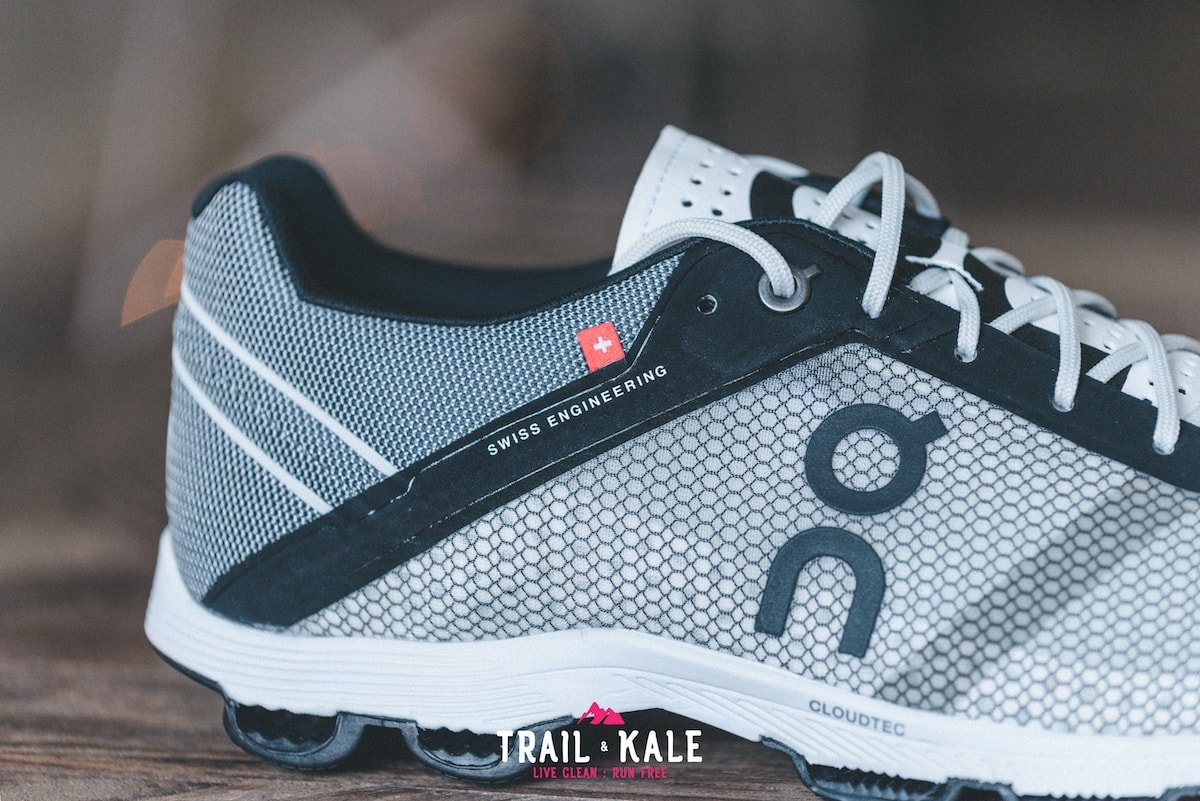 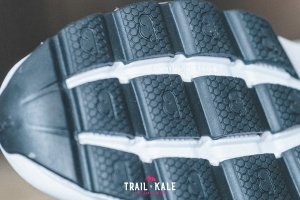 The outsole is what made On-Running famous. Their ‘Cloudtec sole’ innovation took the running world by storm, not only because it looked damn cool but also it actually worked. I’ve talked about this system in some of my other On-Running shoe reviews, the most notable would be the stealthy looking On Cloudventure Waterproofs, check it out below!

In a nutshell, these pods compress when you land on them, providing you with a cushioned landing. Then once compressed, offer you a barefoot style take-off, meaning little energy is lost towards your forward momentum. Pretty clever if you ask me. There are potential issues with this system though, you may occasionally pick up a stone between the pods. I bet you’ll develop your own rather fetching and head-turning technique of flicking them off your shoes mid-run. I did, very sexy. 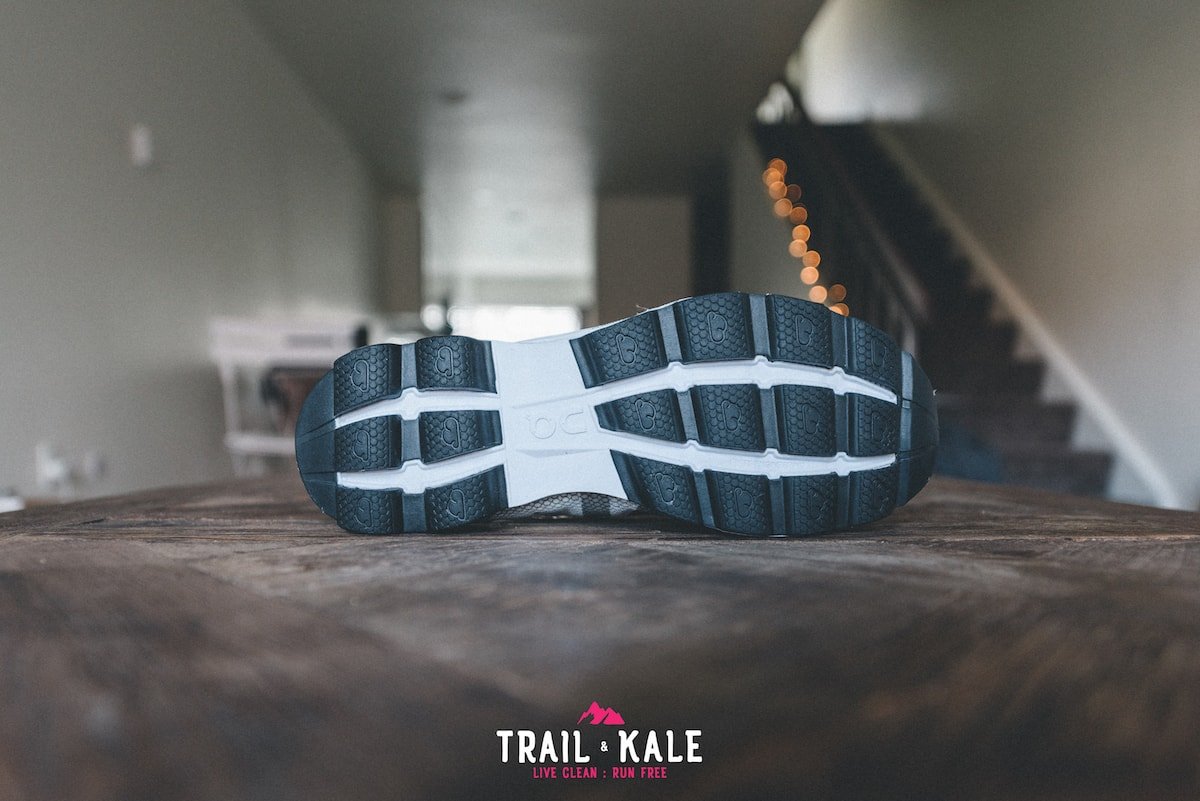 Running in the On Cloudrush

I wanted to try these shoes as I fell in love with the On Cloudracer. I even ended up wearing them for a 55km Ultramarathon in the Lake District, UK. That may sound like an odd choice of shoe for such a challenging trail race! It ended up being a fantastic decision as the race went really well for me.

The reason I chose these shoes for that race, is that every other shoe (at that time) was giving my achilles tendinitis trouble. The On Cloudracer was the only shoe that I could wear that allowed me to run without agitating it. Being able to run meant that I could slowly strengthen my achilles back to full working order without missing out on any running. Why am I talking about the On Cloudracer so much you ask, well because the Cloudrush feels like the same shoe, and I love that about it!

Take a look at this image as an ode to the old On Cloudracer and proof that I actually ran a 50k Ultra in them, haha!

The On-Running Cloudrush is light, responsive, comfortable and very breathable. Four very important properties to have in a shoe when running fast on the roads. If you’re like me, then you understand that not every run can be on the trails, and sometimes the quickest way to get a speed session in is to run on a local road route. 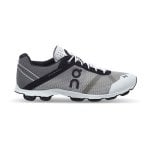 On Cloudrush (Review Summary)
Pros
The light weight (220g) of this shoe combined with On's pod system definitely helped me run faster
Very comfortable
5mm drop is low enough to "feel" extra control when running fast
I was able to run in these even when I had achilles trouble due to the low back wall
Breathable
Cons
Laces are a bit too long
Only available in this black/white colour
The grip on the pods could be more durable
Ankle wall may be too high for some
8.3
Overall Score
Last Amazon price update was: 1st June 2020 8:33 am

The On Cloudrush will be joining me on many more tempo runs. Look out for those PR’s in the Trail & Kale Strava Club 🙂

Visit our Best On Running Shoes Guide for an ordered list of the top ON shoes for road and trail running. It has been designed to make your buying decisions easier. 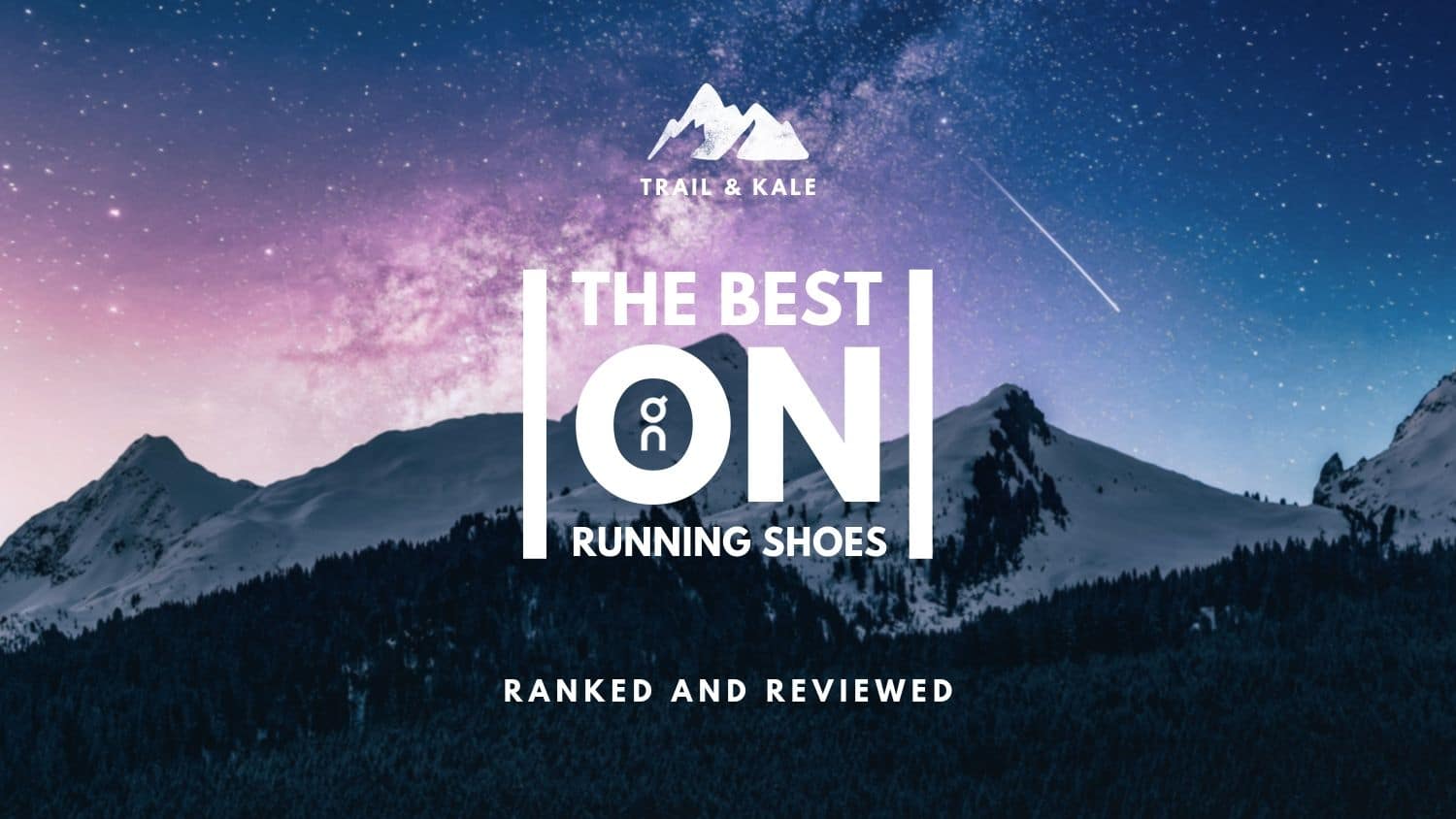 Visit Zappos for discounts on last season's On running shoes.

If you enjoyed reading this post please subscribe to our Newsletter so that we can keep you updated on all things trail running, outdoor adventure and healthy living.

Please check your inbox to confirm your email address.

Alastairhttps://www.trailandkale.com
Hey, I'm Alastair. I started Trail & Kale as a way to share the mental & physical benefits that trail running and nature had given me. Trail & Kale has since grown to become a thriving blog and community that inspires people to trail run, hike, adventure more, and live a healthy plant-based lifestyle.
Gear Reviews & GuidesRunningRoad

This On Cloud Hi Edge review shares my experiences with On's retro-trendy lifestyle sneakers, pros & cons, plus how they compare with other On shoes.
READ NOW

I couldn't believe it when I first saw Dwayne "The Rock" Johnson wearing some of my favorite On Running sneakers. Find out what they are now!
READ NOW

Our list of the 5 best women's waterproof running jackets will help you decide which jacket to buy for wet winter trail runs and ultras.
READ NOW

On Cloudflow Review: The Second Generation (2020) Cloud Has Arrived!

Tried & Tested by Alastair, our in-house On expert! Find out how well they perform and how they compare to other On running shoes in this detailed review.
READ NOW

The Cloud Terry from On Running is an innovative, good-looking vegan running shoe suited to road runs and everyday wear. Read why it is the fastest-selling On Running shoe ever!
READ NOW
- Advertisement -

5 best running hats/technical caps that: wick sweat away from your face/eyes, keep your head/face/neck protected from the sun, look awesome!
READ NOW

Find the best running hydration pack for trail running chosen by our experts. Also learn when to use a running vest, how to choose, sizing, and cheapest prices.
READ NOW

Elevate your camping game: 5 reasons why you need to take the compact, free-standing Mock ONE Hammock on your next camping trip or just to your backyard.
READ NOW

These are the 5 Best no show running socks available In 2020 that offer ultimate breathability, comfort, durability, support, and blister prevention.
READ NOW

For quite some time now I have been a fan of CBD products to support my running training and recovery, so I...
READ NOW

The Backcountry Memorial Day Sale is here, with discounts of up to 50% Off all weekend. These are the top trail running gear deals that caught our attention.
READ NOW

The REI Anniversary Sale is the biggest sale of the year for REI, with discounts up to 30% Off. These are the trail running deals that really GRABBED us!
READ NOW