You’ve probably landed on this review because you’re looking for a new cooler to take with you on your next adventure but not sure which one offers you the most features for your money. We’ve been using the Coolest Cooler for post trail run picnics and recovery feasting sessions. Maybe this is a niche use of a cooler but I think it’s a pretty good one! One thing’s for sure, it’s about time someone made a drinks cooler that actually looks cool.

You’re soon to be travelling for a trail race and know that you’ll be spending most of the day in this beautifully scenic place once your race finishes. You know it’s beautiful because that’s one of the reasons you chose to sign up to the event in the first place. There probably won’t be many places to buy drinks or food once you cross the finish line. Oh and your family/friends who are there to support you could use a stash of food and drink to keep them entertained whilst they wait for you to finish anyway. Sound familiar? If it does then the Coolest Cooler could be a great investment for you.

It’s clear that a lot of external design work has gone into the Coolest Cooler. It’s a thing of beauty but what’s it like in terms of features, build quality and practicality?

The Coolest Cooler has many features so let me start with the key ones that set it apart from other coolers.

The Coolest Cooler has a removable and rechargeable battery that allows the cooler to pack some pretty unique features. Having a built-in blender is one of them. We have been using the blender to mix superfood smoothies and protein shakes for our post run recovery drinks. It has been known to make us some crushed ice cocktails too of course 🙂

A USB Charger is very useful when you’ve been taking running selfies with your phone all day.

The Coolest Cooler comes with an outdoor splash proof speaker that can pair with another one up to 30 feet away if you ever feel the need to extend your ‘party zone’. I’m very impressed at the sound quality, it has a lot of ‘boom’, so to speak! The speaker also carries the same retro design as the cooler itself.

An important but often overlooked feature that every cooler box deserves. If you have a bottle of wine to open as well as beer then the Coolest Cooler also comes with a separate bottle opener for that.

LED Light in the lid

If you find yourself partying into the night the Coolest includes a little silver button which activates an LED light in the lid so you can see inside the cooler box.

Plates and a sharp knife

The cooler also comes with some plates and a sharp knife, incase you need to cut some cheese, limes or anything else you can think of. I like the way its all tucked away in the lid for safe storage and easy access.

It’s the simple things… The speaker that comes with the Coolest is stored in a compartments on the front but once the speaker is out, you can be using this space to store other things, like your phone, recovery protein bar, or even a banana!

Once ice has been added inside the cooler and the lid is shut, the ice should stay frozen for up to 4 days, according to the Coolest website. I haven’t tried this myself as the ice was beginning to melt after two, albeit in quite warm conditions though.

Other Features that deserve a mention

The Coolest Cooler is built to a high spec and feels like it will last for a long time even with heavy usage. It has heavy duty hinges on the lid, which is needed because of its weight. 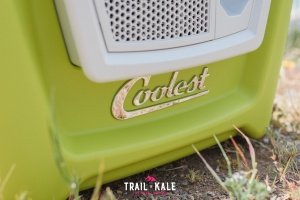 Having so many fun features adds some weight to the Coolest Cooler and makes it quite large. With that in mind, it can be tricky to store, unless you have enough extra space at home.

There’s a good amount of space inside the cooler for drinks and food but a full cooler can be heavy for one person to pick up and load into a car. There are handles on either side that make it easier to pick up though.

The big wheels and extendable handle on the cooler, make moving it very easy when pulled on its wheels, over most terrain types. 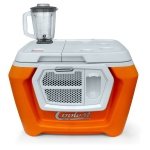 Best deals for the Coolest Cooler

We’ve been having a lot of fun with the Coolest Cooler when adventuring to new places for trail running. It allows us us to stay longer after a run and enjoy the scenery with a drink and some food, before having to head back home. If you’re in the market for a new cooler, then I don’t think you need to look much further, give the Coolest Cooler a try!

The Coolest Cooler comes in a multitude of colours and is selling available in the Coolest online store.

The best quick dry towels for camping, the beach, boating, watersports and other adventures, including ultra-lightweight pack towels for travel and backpacking.

This TruMedic Massager review shares whether or not this powerful yet quiet, premium massage gun package with 6 speeds, 5 heads is worth $300